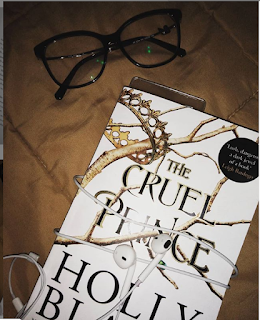 So, this is obviously not going to be that cruel of a review, I just wanted to use this title.
Today we are spoiler free reviewing "The cruel prince" by Holly Black and we will also discuss it.
So as usual I will start with a spoiler free review and then  I'll warn you when the discussion will start so the non spoiler people can click off and the people that read this book can keep reading.
I have a lot of things to say about this book so let's start.

This book came out last year and it took me a while to decide that I actually wanted to try and read it, this is a dark fantasy, I've never tried so many dark fantasy this was so hyped that I wanted to give it a shot.
I gave it 3.5 stars, it was pretty good, I was entertained and interested by the plot but it has many issues and things that I didn't like.
This book follows the story of Jude a girl that had to witness the death of her parents murdered by a faery that will then kidnap her and her sisters to bring them in this faery world, where she won't live ans easy life since she'll be hated by the faery people there that will just bully her and her twin sister all the time.
So, let's start with the positive aspects of this book.
The cast is really diverse, we have black people, we have female to female relationships so I really loved this and the main character Jude us an aspiring knight which is usually something that's reserved to guys but in the book we also have female knights and female of power which I loved.
The story was interesting and I was really entertained the whole time but there were so many scenes that just were not needed at all, like all that bullying, what was that?
So, I will be continuing with the series because I kind of want to know what will happen next but yeah, I wasn't too... I don't know, the beginning was really slow that I thought that I was going to dnf it, and in the middle of the book it would get way too political with nothing happening, but overall I enjoyed the read and I would recommend it.

Now I'm done with the non spoiler review and I will get to the discussion which will contain spoilers so bye non spoiler people.

Click off if you don't want to be spoiled.

I begin with the spoilery discussion.
Swears and bad words ahead.

I couldn't talk about many of the things I didn't like because it would have been spoilery so I am going to discuss them with you, I have watched a lot of reviews but nobody seemed to be bothered by these things but me.
The first one was why no princess was considered to be the queen of Elphame but just the boys were? That pissed me off so much.
Another thing that bothered me a lot was the fact that Jude was born in 2001 and she's 17 years old when everything's happening so we are in 2018 and Lock needed to ask Madof for Taryn's hand?
Who fucking does that? In 2018? Asking for my hand? The only person that you have to ask my hand for is MYSELF, because my father doesn't fucking own me, he doesn't have the right of property on me, so I can decide for myself I'm no object, I was PISSED with that, I could have stood it if this book was set in the 1800s but no, WE ARE IN 2018. THAT'S NOT A THING ANYMORE.
Us women are fucking worth it, nobody owns us.
Another scene that was kind of unnecessary was when Jude wanted to save that girl, she has always said that she kind of hated humans, so why did she even feel the urge of saving her?
And what the fuck was Taryn doing? That whole thing with Locke, did she actually prefer a dude over her own sister? That was messed up and I loved the fact that Jude wanted to duel her, I would still have killed her because, what the fuck was that.
When she killed Valerian... why the fuck did Valerian think that it was a good idea to go to her house to kill her? He was going to his death 'cause if she yelled people were going to go save her, I just didn't get that whole scene and nobody seemed to notice that Valerian wasn't around anymore and silently accepted his death.
One last thing is Cardan's excuse for hating Jude, did he actually hate her just because Madoc loved her even if she was the daughter of is cheating wife and because he couldn't stop thinking about her, THAT'S NOT EVEN HER FAULT.
Even if I kind of ship them together.

Anyways, let me know what you thought about this book and I'll see you in the next post.
Byee.